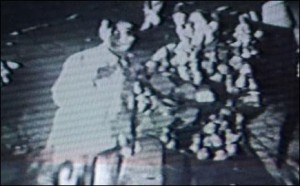 There are several stages in the Philippine courtship tradition of harana (serenading).

During the filming of Harana the movie in late 2008, I had the opportunity to travel to remote provinces of the Philippines in search of master haranistas – the vanishing breed of expert singers skilled in the art of serenading.

Serenading was particularly popular in the Philippine provinces from early to mid 1900s, even as late as 1970s. Contrary to the common notion, serenading in rural Philippines was less about a man’s declaration of love and more about the simple desire to introduce himself to a woman in a gentlemanly fashion. The image of a lone singer/guitarist under the window at night (which I am guilty of perpetuating by using this cover for my first album The Art of Harana) probably happened more often in the movies than in real life. The truth is harana was indeed a bigger social event. It was a call for an evening soiree.

The most common instance that sets a harana in motion is the arrival of a woman from a big city (like Manila) who is in the province for a vacation. Like Pavlovian dogs, men were conditioned to organize and bring out their guitars upon getting a glimpse of a beautiful new arrival.

Another common notion is that any man interested in serenading can do the singing himself. We may be a nation of singers but not all singers are created equal. And since the success of the endeavor depends largely on the skill of the singer, men sought the services of master haranistas – the best in town.

These were the men we sought after for the Harana film. And I am happy to say that we found three very colorful characters who are amazing singers in their 60s and 70s. These men definitely have something that is rarely bestowed on typical singers – the gift of straight-to-the-heart communication, earnestness and sincerity in their songs. A poignancy borne only from their humble existence and shy nature. Oftentimes, the mere sight of these leathery-faced men singing beautiful melodies is enough to have the whole Harana film crew in bawling fits.

I learned a lot from these men. Not only of new songs but insights on the harana custom itself. I was fascinated to learn that there are several stages to the endeavor along with adherence to certain disciplines. Whenever I ask for a song, they would often ask back ” Ano ba sir, panawagan ba o pagtatapat?” (Sir, do you want Announcement or Proposal?). To which I reply “Ano po?” (I’m sorry, what?”)

So herewith are the different stages of harana as they did in the province of Cavite:

Panawagan (Calling out or Announcement)
As the term suggests, it is the stage where men are outside the window announcing their presence. It comes with a specific set of songs. These songs often place them in the act of serenading from the outside, politely imploring the woman to open the window. Examples of these songs are Dungawin Mo Hirang (Open the Window, Beloved), Natutulog Ka Na Ba, Sinta? (Are you Asleep, My Love?), Sa Gitna ng Dilim (In the Midst of Darkness) and Kay Lungkot Nitong Hatinggabi (How Sad This Midnight Is) to name a few.

One of my favorite titles is Umaga na Pala, Sinta (I Just Realized It Is Morning Now, My Love). It implies that the poor soul has been singing the whole night without the woman opening the window. Talk about tenacity.

Pagtatapat (Proposal)
Panawagan (1st base) is deemed successful if the woman opens the window and you are invited inside the house (2nd base). Once situated in the living room, under the watchful eyes of the parents, another round of singing ensues. It calls for another subset of songs called Pagtatapat or Proposal. This is the stage where men unabashedly declare their admiration for the woman’s beauty and presumed virtues.

Examples of these songs are Ibig Kong Magtapat Sa Iyo Paraluman, (I wish to Propose to You, My Muse), Lihim Na Pagibig (My Secret Love) and Kung Ika’y May Alinlangan (If You Ever Doubt Me).

Panagutan (Response)
I was surprised to learn that after two or three Pagtatapat songs, the lady being serenaded is encouraged to respond through, well, a song. In fact, one haranista told me that in his province, women who were known to sing well tend to get serenaded more often.

The haranistas in Maragondon, Cavite introduced me to an elder lady known for her singing during serenades. When I asked her which song she would respond with, she said “It depends. If I like the fellow, there are some songs for that. If I am not that interested or if I am unsure, it’s a whole different set of songs”.

If she is unsure, she may choose to sing Constancio de Guzman’s Ang Tangi Kong Pagibig (My Only True Love), a song where the first line declares “Ang tangi kong pagibig ay minsan lamang” (True love for me is rare). Very poetic, not to mention diplomatic.

If the answer is affirmative, she cited the song Maala-ala Mo Kaya by the same composer, a joyous song that declares O kay sarap mabuhay, lalo na’t may lambingan (Oh how sweet it is to live, more so in the presence of love and affection).

The haranistas, in turn, have a song handy depending on the lady’s response. If unrequited, the haranista could choose a song titled Kay Hirap Mawalay sa Piling (How Painful to be Away from You), Ako’y Isa Na Ngayong Sawi (I am Now Brokenhearted), Pusong Wasak (Shredded Heart) and my favorite Laot Ng Dusa (Open Sea of Suffering).

If victorious, he would simply join the woman in singing say, the  Maala-ala Mo Kaya song which was actually written as a duet between lovers.

The singing apparently would go on late into the night. It was not lost to me that harana probably had that quality of enjoyment one might feel in a karaoke setting. In fact, I dare suggest that harana singing could be the prototype of the now famous (or infamous) karaoke where a group of friends take turns singing well into the night. But I digress.

Pamaalam (Farewell)
No one ever gets a home run in a harana (if you know what I mean). First of all the parents are right there with you in the living room, making sure the kabataan behaves. Philippines back then was even more conservative in behavior especially in the province. Shyness is considered a virtue, no touching is allowed, and abrupt and rude behavior was not tolerated.

The night ends using another set of songs called Pamaalam. The style of these songs are a little different, mostly happy with a faster tempo. Interestingly, where most of harana songs are in 4/4, Pamaalam songs tend to be in 3/4 tempo and sounds more like folk songs than love songs. Songs with titles like Winawakasan Ko (I Hereby End It) and Bakit Di Kita Maiwan (Why Do I Find it Hard to Leave You) are good examples. The haranistas then disappear into the night.

You see, everything they did that night was cloaked under the songs, which is more powerful and probably a whole lot of fun. It’s full of pent-up feelings that society dictated cannot be expressed outwardly. But if you sing it, not only is it acceptable but quite elegant and meaningful. It also follows a tradition handed down from generation to generation. In fact, if you ask your lola (grandma), chances are your mother or father is a harana baby – born and flowered through a seed called the harana.

To see and hear the haranistas, please view the Harana movie trailer:

Turnback Tuesday - The album cover that never was.
I like to sleep it off sometimes. . #classicalguit
One of the unexpected benefits of pandemic - I get
I guess I do miss playing live shows even though I
I think I’m more excited about the romanticized
The Guitars I Use, Part 3 Cordoba Solista Flamenca
The Guitars I Use, Part 2 Cordoba Torres (2014) -
The Guitars I Use, Part 1 Some of you are curious
More Fandangueros! This is a classical guitar piec
Load More... Follow on Instagram
Home | Bio | Albums | Events | Blog | Contact
Florante Aguilar