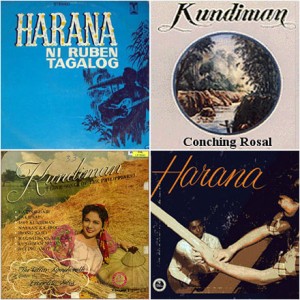 If you are one of the Filipinos having a hard time distinguishing between harana and kundiman music, don’t be ashamed – you are not alone! It is very easy to confuse the two.

It is common to hear people refer to ANY old Tagalog love song as kundiman or harana. Though I cringe every time, I often don’t bother to correct them because I’m in no mood to start a dissertation type of explanation. But a blog, now there’s the perfect soapbox to indulge.

So, herewith is my attempt to correct some fallacies. To Philippine music scholars out there, feel free to chip in at the Comments section below.

During a serenade, one can pretty much sing any love song he likes, even English ones, and still get away calling it a harana. But if you are going for a truly authentic harana experience like they did in old Philippines, you have to use a particluar set of songs specifically written for the endeavor. These songs were written by some of the better-known composers in the last 75 years such as Santiago Suarez, Constancio de Guzman and Antonio Molina, to name a few.

Harana music has its very own distinctive style and a clear stamp of authenticity. In musical terms, the rhythm is habanera which is in 2/4 time. Interestingly, none of the haranistas I met knew what a habanera was. That term is used mostly in western classical music. Instead, the haranistas refer to this rhythm as danza. To hear a sample of this rhythm, click here.

The arrangement is simple and straight forward. It always starts with an introduction of solo guitar, then verse 1 followed by verse 2, then a little bit of solo guitar in the middle, then back to verse 2 until the end. Occasionally, there are short exchanges between the guitar and voice in the middle, like they do here.

Another area to look for signs of authenticity is in the lyrics. True harana songs place the singer in the act of serenading such as when he implores “Dungawin mo hirang” (Look out the window, my beloved), “Natutulog ka na ba, sinta” (Are you asleep, my love) or “O Ilaw, sa gabing madilim” (Oh light, in a night so dark).

My favorite aspect of the harana lyrics is its use of pure, unadulterated and archaic Tagalog. They use words you and I will never hear in a daily conversation in Manila. Words such as idampulay (to offer or give), tanglaw (luminous or luminosity), or pagkagupiling (a light sleep). You will also never encounter even a hint of Spanish word – a characteristic shared by kundiman songs. Harana and kundiman may be the last refuge of the ancient Tagalog language.

Instrument-wise, the guitar is the most trusted companion. Though other instruments were known to be used such as the violin and banduria most recordings of harana from the 1940s to 1960s featured only a guitar (or two) accompanying the vocals.

There are many popular Filipino love songs that don’t meet these requirements but nevertheless were used in harana. Songs such as the popular Dahil Sa Iyo by Miguel Velarde, Jr. or Dahil Sa Isang Bulaklak by Leopoldo Silos. Stylistically, the haranistas never refer to them as harana, instead they just call them ‘love songs’.

Things to look for: when you hear the danza rhythm played on guitar combined with lyrics that place the haranista in the act, using archaic Tagalog, that’s a dead giveaway that you are listening to a true harana.

One of the main reasons kundiman is mistaken for a harana is because haranistas would oftentimes sing kundiman songs during a harana. See how easy it is to get confused? But make no mistake, harana and kundiman are stylistically different.

Whereas harana is in 2/4/ time, kundiman is in 3/4. The formula is verse 1 on minor key (e.g. C Minor) followed by verse 2 on parallel major key (C Major) midway through. This is intractable. Stray from this formula, and you no longer have a kundiman.

As mentioned, the language is also in archaic Tagalog but the theme subject is different from harana. Kundiman songs have a fatalistic woe-is-me streak to it. He is always heartbroken, very poor with nothing to offer other than his undying love, and willing to suffer, even die, to prove his love. In fact, the word kundiman is said to be the contraction of the phrase “kung hindi man” (if not, or if not meant to be).

If there is a single art form that captures the Filipino character, kundiman would be it for it is said that the Filipino’s humble nature and willingness to be trampled on is the main reason we allowed years of colonization and oppression from Spain, America and Japan. Even a fellow Filipino dictator was in on the flogging. Perhaps a controversial statement if not an exaggeration.

Whereas harana were sung exclusively by men, the history of recordings might give you the impression that kundiman were more often sang by women. This is attested to by recordings and accounts of luminaries such as Conching Rosal, Atang dela Rama and Sylvia la Torre. This is because it happened during the advent of recording in the early 1900s as well as the rise of the formalization of kundiman art form championed by Nicanor Abelardo, Bonifacio Abdon, et al. These composers were trained in the west and were very successful in integrating the operatic aria style into the kundiman. It is sung by a soprano and accompanied by full orchestra or the piano. This is the kundiman most of us know today (samples below).

It is based on the kumintang, a true indigenous (pre-colonial) style of song and pantomime that originated in the Tagalog region, probably Batangas. The guitar was later incorporated upon the arrival of Spain. The kumintang is a whole different subject that warrants an extensive research.

Things to look for: the kundiman is in 3/4 time, starting in minor key, switching to major key in the middle, uses archaic Tagalog, with the subject matter that revolves around being heartbroken.

Chances are, you probably won’t hear true harana or kundiman in our daily lives because they are not played (or seldom played) on the radio, television, internet or live performances. And if you hear one, chances are it is kundimanin (pseudo-kundiman) and treated more like cheap ditties rather than art form.

On top of distinguishing between the two genres, I also want us to make a clear distinction between authentic harana and kundiman. There are many versions out there, including some of my own recordings, that do not exactly meet these requirements. I am not saying that other versions are not valid, in fact, I encourage evolution and modern iteration of these genres as long as they are done well and they retain the spirit. I castigate them not for being inauthentic but for being truly horrific. But that’s another topic.

So, the next time you hear an old Tagalog song, try not to automatically categorize them as harana or kundiman. Chances are they are neither because true ones are hard to come by. But should you encounter one, you may now consider yourself armed with the knowledge to distinguish between the two.

Music Samples
(Note: To avoid copyright infringement, all music samples below are truncated to about 60 seconds)

Hear an example of kundiman in its most basic form of guitar and male voice:
Bituing Walang Ningning (composer unknown, sung by the haranista Romeo Bergunio from the upcoming documentary film Harana)

This message is only visible to admins.

Error: Error validating access token: The session has been invalidated because the user changed their password or Facebook has changed the session for security reasons.
Type: OAuthException

More details and get tickets at
www.sfiaf.org/dadap-aguilar_duo ... See MoreSee Less

Our 3rd video is out! May the New Year bring out the inner child in you and the simple joy it brings. Here’s my take on a Filipino folk song Atin Cu Pung Singsing performed by the Dadap-Aguilar Duo from the album Lulay.

Our second video is out! Lulay the album title track by the Dadap-Aguilar Duo, arranged for two guitars by Maestro Michael Dadap. Lulay is a Filipino folksong and the name of a demure maiden whose affections are not easily won over in courtship.

To view the full version, go to:
www.dadapaguilar.com/lulay

Special thanks to fabulous filmmaker Fides Enriquez who shot and directed the video. ... See MoreSee Less

It’s here! Two years in the making, my duo album with Maestro Dadap titled LULAY will be available for purchase by CD or digital distribution December 1st. https://www.instagram.com/p/B5I-xwfDA8C/?igshid=uhi0k66vlawx

Slow practice first ...then fast. Rehearsing my part for the Dadap-Aguilar Duo album launch this December 1st. This is Maestro Dadap’s take of the Filipino folk song Lulay. @ The Napa Valley https://www.instagram.com/p/B4siJJ6DjV7/?igshid=bo0u4pli6ann

#girldad #kobebryant
The simple pleasure of eggs & #cappuccino. Then pr
May the new year bring out the inner child in you
Merry Xmas 2019! Re-post from last year. #caroloft
The title track from our album Lulay by the Dadap-
Our first video from our new album LULAY by the Da
Locked In! Dadap-Aguillar Duo LULAY Album launch
Happy 🦀-giving everyone!
It’s here! Two years in the making, my duo album
Slow practice first ...then fast. Rehearsing my pa
Frida’s piano teacher confirmed what I’ve alwa
The Michael Dadap & Florante Aguilar Duo album of
Always such a joy playing with my mentor maestro M
On June 12, 1898, in my home town of Kawit Cavite,
Concert set-up. June 1st @sfiaf2019 and June 9 @br
A love triangle between a demigod, a princess and
Ready for #gameofthrones. I was roped into this bu
Special project. UTOM is a commissioned work inspi
New work! World Premiere on June 1st @sfiaf2019 an
From the music of the colonized to that of the col
Load More... Follow on Instagram
Home | Bio | Albums | Events | Blog | Contact
Florante Aguilar