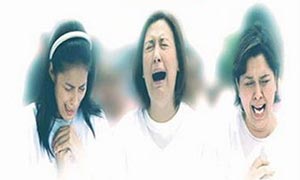 Admit it. If you’re Filipino, you are a sucker for corny ballads. You go teary-eyed on some of the sappiest American pop songs. Even boxer Manny Pacquiao belts out an old tune from the 70s (Sometimes When We Touch by Dan Hill) on late Night with Conan.

When I was growing up in Cavite in the 70s, all the jeepneys blared slow American rock songs with sad undertones (e.g. Scorpion’s Always Somewhere, Deep Purple’s Soldier of Fortune, etc). Now these songs were never that popular in the States but Filipinos picked it up like their own. I come to Manila 20 years later, they are still playing the same songs. And don’t get me started with Barry Manilow, who to this day is considered a demigod in the Philippines.

But have you ever wondered why? Is it because pensive songs befits the slow pace that the weather dictates? What is it about Filipinos that get attracted to corny ballads like moths to a flame?

If you’ve read my past blog entries, I think you know where I am going with this.

I believe there is such thing as national identity through music.  If you look at Brazil, their songs are almost the opposite – more joyous, celebratory and extroverted. While Portugal’s music almost has the same penchant for sad songs as Philippines. Of course I am not generalizing, but merely pointing out patterns of inclination and predilections (isn’t that the same thing?).

I submit that the Filipinos’ penchance for sad and pensive songs is a manifestation of the primeval kundiman sentiment. It’s a direct result of the national affinity for sad songs dating back to precolonial times. Unfortunately, it was soiled and diluted out of its original sentiment – a victim of devaluation of its own culture in exchange of adoration of the western’s.

I have discussed this topic with the pre-eminent composer and Philippine music scholar Bayani Mendoza de Leon and would like to share excerpts of our email correspondence. He writes:

“The general pensiveness and dolorous character of our music was an offshoot of our kinship with Malayan, Java, Hindu, and Arabian racial stock. The earliest, oldest manifestation of this kinship is the song form ‘Tagulaylay’, which is a lengthy melodic succession of monotonous lamentations with a theme that depicts grief over some tragic events. It might be due to this lamentable character that the song was best adapted to the ‘pabasa’ or reading of the Passion of our Lord. The word ‘tagulaylay’ might have been derived from the combination of two Tagalog words–‘taghoy’, meaning lament and ‘alaylay’, which means ‘sustain’. Portuguese songs, best exemplified in their national song form, Fado, also drew greatly from Arabic sources, hence their affinity with our own.”

So, if you’re thinking “that’s ridiculous, there is no way my love for Barry Manilow’s music stems from my ancestors appreciation for sad songs”, I say don’t be so sure!