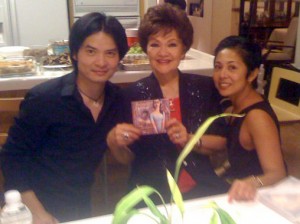 Sylvia la Torre, the grand dame of Philippine cinema and the kundiman art song, flanked by myself and co-producer Fides Enriquez

Many older Filipinos know Sylvia La Torre as the grand dame of Philippine cinema and television. She is known as a comedian notably starring as Sebya with fellow comic Pugo (Mariano Contreras) in a series of popular films. She is also known as a co-host in the daily noon time show Oras ng Ligaya in the 1960s. Her long illustrious career also includes many recordings of American-infused Tagalog novelty songs.

But few people are aware that Sylvia La Torre was a conservatory-trained soprano who worked with the greatest composers of the kundiman genre. Ms. La Torre was so successful in crossing over to the popular genre – a feat few of us musicians can ever match – that it overshadowed her true love for and skill in kundiman singing.

Armed with this purpose, my partner and fellow adventurer Fides Enriquez and I set about tracking down her whereabouts in the hope of convincing her to come out and perform for a big crowd in San Francisco. We were also interested to see if Ms. La Torre might consider appearing in our Harana documentary film.

Preliminary investigations yielded the fact that at 75 (at the time), she still had the singing chops and was practicing daily to keep her voicebox in great shape. This was very exciting piece of information!

We obtained a tip that a personal friend and acting liaison for Ms. La Torre was going to be at a big community event in Daly City. It was a long shot but we decided to brave the fog. To be invited to this event, I had to offer my services as a musician. I brought along singer Danny Harana to perform some harana and kundiman songs. We thought this might strengthen our case to Ms. La Torre’s friend.

To make a long story short, we met with the liaison and she was very excited about our idea. But we had to be vetted first before she would talk to Ms. La Torre. We needed to provide the scope of the project and discuss the business side of things, etc. After several weeks of going back and forth, we arrived at last to a very fine moment –  a date and location was set to meet with Ms. Sylvia La Torre!

With the intention of filming the encounter, we had in tow a film crew of 10 led by director Benito Bautista as we set out and drove 2 hours to our rendezvous with a legend.

The world simply stopped when Ms. La Torre entered the room. We felt we were in the presence of greatness. Even the film crew members who were not Filipinos were in awe. At 75, Ms. La Torre is vibrant, exuding the luminous elegance and giant personality that translated beautifully into the television sets of the past era.  Her signature comic timing intact, she is ready for a show.

It occurred to us that it is a travesty Ms. La Torre is seen less and less when in reality, she is very much ready for the limelight and adoration of millions of fans. Furthermore, not many Filipinos seem cognizant of the fact that she is a direct source of cultural wealth and information when it comes to the kundiman. She is a true master and among the last of a vanishing breed.

And I want to tell you that Ms. La Torre truly knows Filipino music when it comes to the correct forms and structures. In fact, she wondered aloud why we would want her in our harana film when she is in fact a kundiman singer, not a harana singer. I thought that’s fantastic! What’s unclear to us commonfolk is a difference between night and day to the masters (Read about the difference between harana and kundiman).

I had the honor and pleasure of accompanying Ms. La Torre in one of her signature songs – Sa Kabukiran. It was a blast! I was also impressed by the difference of her character behind and in front of the camera. Behind camera, she is a professional at work, very business-like, addressing Benito as ‘direk’. In front of it, she is once again the vivacious comedian of the noon time TV show “Oras ng Ligaya”. The switch was a little jarring. I believe this is called professionalism.

Now, Ms. La Torre and her husband/acting manager Dr. Celso Perez de Tagle are very sensitive to doling out permissions to publish any of her music or personal appearances. This is rightly so. And since we respect their wishes, I am sorry to say that I can show you neither the clip nor the sound bites from the film shoot. This will remain so until the Harana producers secure funding for licensing and both parties come to a mutual agreement to proceed. And more importantly, if the footage serves the narrative of the film.

As for the planned kundiman concert in San Francisco, it became apparent that funding for this project, which was from the San Francisco Arts Commission, was not sufficient to cover the licensing, talent fee plus expenses of Ms. La Torre’s entourage, and a host of other expenses necessary to present the show. It was indeed a learning process for myself and co-producer Fides Enriquez. Maybe it was a case of newbies with more ambition and good intent than wherewithal. Or perhaps the liason overestimated our capacity. Probably a combination of both.

But I have nothing but deep respect for Ms. La Torre’s decision. As a professional, she knows what she wants. Her legacy secured in the annals of Philippine music and cinema, there is no need to perform every time she is asked to. The world must be on her terms.

I also learned a lesson from Ms. La Torre – that whether people value your music or not, you must protect your product from copyright infringement. Even if it means obscurity to a newer generation of audience, you simply cannot publish without the owner’s permission. You will be hard-pressed to find film footage of Ms. La Torre in action on YouTube or anywhere else. When I mentioned that I found an old comedy footage of her performance on YouTube, they were alarmed. About a week later, it was gone.

Personally, the meeting turned out to be consequential for out of the ashes was born “Lalawigan – A Tagalog Song Cycle”, the show that replaced the original concept. An original composition, it is also intent on highlighting the kundiman (among other Filipino art forms) but in a more exploratory and contemporary direction.

It is not often that one has the opportunity to brush with greatness. Director Akira Kurosawa once said that the reward is not always in the result, but in the journey itself. We may not have been successful in presenting the original concept of a kundiman show, but meeting the grand dame herself, accompanying her in song, is definitely one for the books (or blogs).